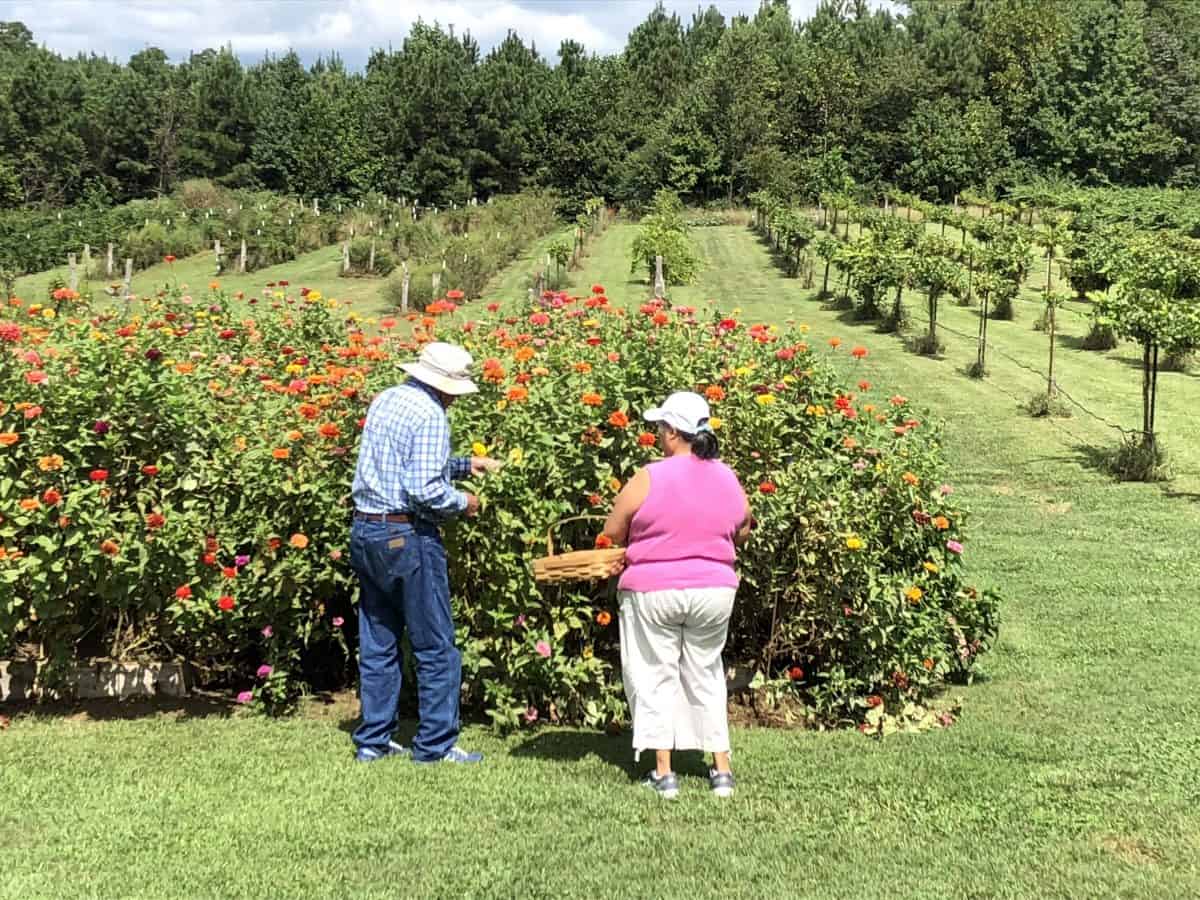 The Traveling Chefs met Harvey and Jane in their Old Carthage Farm. In the course of their travels, the former oftentimes meet special people. At few times however, their path comes across with very special ones. This story is about one of these few times.

While searching at Google for a local farm one day, they found out that many visitors have rated Olde Carthage Farm rather highly. One person wrote, “What an amazing place, the owners are some great people…” G. Tomeski.

When The Traveling Chefs entered Olde Carthage Farm, in Carthage, North Carolina last September, two incredibly special people touched their lives. They were Harvey and Jane Godfrey. The former was talking to another gentleman when The Traveling Chefs were parking their RV. Harvey promptly ended his conversation with him and warmly greeted them.

“We have only muscadine grapes this time of the year,” Harvey said. “Would you like to pick them?”, he continued. The Traveling Chefs couldn’t believe their ears! They haven’t picked grapes before. “Of course!”, they said, selecting half a gallon container.

“Follow me!”, Harvey said as he led them to the vineyard. He showed them how to pick the grapes and surprised them by saying, “You can eat as much as you like. You only pay for the ones you bring home.”

He picked a couple of grapes and ate each one of them, spitting out the seeds and the skin. As soon as The Traveling Chefs knew what they were doing, he left them by themselves.

The Traveling Chefs took turns taking videos and photos of each other and sharing them with their friends through Facebook. “Where are you guys?”, many of their friends asked. They, too wanted to experience something like this.

When their tummies and their bucket were filled with grapes, they hastened to Harvey who was seated on one of the chairs available. He motioned them to sit beside him and converse with them as if he had nothing better else to do in the world.

HARVEY PICKS FLOWERS FOR ALICIA AT HIS OLDE CARTHAGE FARM

He told them that he and his wife also enjoy RVing usually in Florida in winter. They don’t like the highways, he confided. When Chef Pedro asked if they also sell the flowers in front of them, he said yes. “I will pick some for your wife.”, he volunteered, requesting Chef Alicia to follow him.

Wait, did The Traveling Chefs tell you Harvey gave the flowers to Chef Alicia for free? He did! What a generous gentleman Harvey really is!, they thought.

Their conversations touched more deeply into each’s other lives including golf, family, vacation, and the farm. Finally, Chef Pedro inquired about the pond. “Are there fish on it?”, he asked. Harvey took some feeds from his barn and asked Chef Pedro to follow him.

As soon as the feeds hit the water, a throng of fish wiggled in the water. “Can I fish here?”, Chef Pedro excitedly asked. “I would love to let you do it, but I have been saying no to everyone,” he apologetically said. The kids have a great time feeding them when they come, he explained. For security reasons, he hasn’t allowed anyone to fish.

Meanwhile, Chef Alicia was spending time with Jane in their office. Chef Pedro and she found Jane very pleasant, down to earth and as amazing as her husband. They learned that Jane is the one doing the hard work in the farm, mowing and everything.

As they drove out of the farm, The Traveling Chefs were telling each other how lucky they were and how great their hosts were. People are special because they make other people special, Chef Pedro thought to himself. Harvey and Jane will be in their hearts for a long, long time.