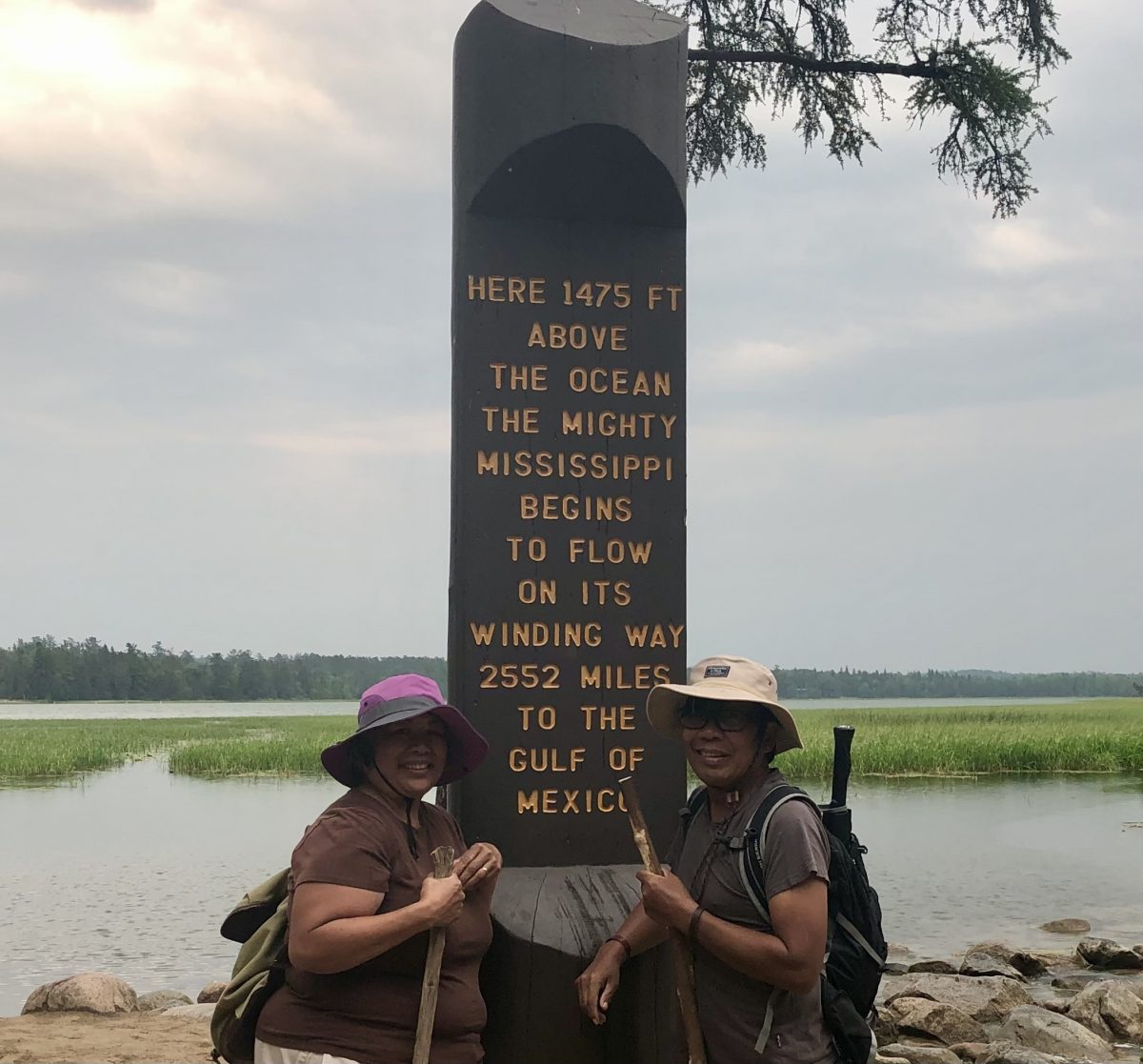 The Traveling Chefs can honestly say they have crossed the great Mississippi River. In fact, they did on July 19, 2021 at its headwaters on Lake Itasca in northern Minnesota. Mizi-ziibi means “Great River” in Ojibwe, an indigenous North American language of the Algonquian language family per Wikipedia. It is the second-longest river in North America flowing from its traditional source in Minnesota through Wisconsin, Iowa, Illinois, Missouri, Kentucky, Tennessee, Arkansas, Mississippi and Louisiana to the Gulf of Mexico.

HOW THE TRAVELING CHEFS LEARNED ABOUT THE MISSISSIPPI RIVER’S HEADWATERS

The Traveling Chefs learned about the Mississippi River’s headwaters while camping for the night at the Golden Eagle RV Village in Minnesota on their way to North Dakota. As a rule of thumb, they would normally explore the campground shortly after their arrival.

While they were strolling there, a gentleman drove his golf cart to their direction and started a conversation. A simple hello from this kind gentleman turned into a valuable exchange of mutual experiences.

“Which places have you been been to here in Minnesota?”, he asked. “Nothing yet”, they replied. “You might consider visiting Lake Itasca. I’ve been there a couple of times and always had a great time,” he said. In fact, he said, he has crossed the Mississippi River there! This one caught their interest and they told him they’ll give his suggestion a good thought.

MRS. MARY DIRECTED THE TRAVELING CHEFS TO THE HEADWATERS OF THE MISSISSIPPI RIVER

Mrs. Mary owns and manages the Golden Eagle RV Village and when she learned that The Traveling Chefs decided to visit Lake Itasca, she directed them to the headwaters of the Mississippi River. She also allowed them to extend their reservation for another night. She is business-minded but helpful. “You will not get lost,” she assured them after giving them directions to the place.

On the way back to their camper, they were greeted by a bunch of fellow RVers gathered on the first lot belonging to a couple who are also Floridians. They all celebrated when they’ve learned that The Traveling Chefs have decided to spend one more night to visit and cross the Mississippi River headwaters. The latter were surprised to learn that several of these RVers there are also residents of Florida where they spend half of the year.

The Traveling Chefs thoroughly enjoyed Lake Itasca and had a blast at having crossed the Mississippi River. It took them over an hour to reach the place from the campground. The drive was pleasant and fun. As soon as they arrived at the parking lot, the rain poured. When it stopped, they join the other visitors to the headwaters of the Mississippi River.

Along the way, a couple of men talked to them about the rain. They said there is a big drought in the area. “It hadn’t rained here in a while,” they said. The Traveling Chefs related to them that when they were in Ohio and Michigan not too long ago, it rained there heavily. “We must have brought the rain with us!”, Chef Pedro joked. They laughed and said, “Come again tomorrow.”

When they reached the headwaters, they found the origin of the Mississippi River. It flows from a narrow and shallow opening about 12 foot long off Lake Itasca. Chef Pedro crossed it first, followed by Chef Alicia. They both raised their hands on the air at the completion of their successful crossing and pumped their fists. Chef Alicia even took off her shoes and hopped on the stones while Chef Pedro watched in horror for fear she might slip. Some of the stones are slippery, especially the parts that touch the waters.

Chef Alicia ignored his warnings, and even walked downstream barefooted. “Come on, Dad!”, she urged him, commenting how good the water felt. He has never seen her as happy as this in a long time. She said this river reminded her of the one she grew up in the Philippines.

After crossing the Mississippi River headwaters, Chef Pedro wanted to fish Lake Itasca. On the way there, they dropped by to see the old cabin built by the early pioneer in the area. Chef Alicia preferred to stay in the RV, already contented with having crossed the Mississippi River and waded along downstream.

Driving southward, they saw a joint where visitors can rent boats and kayaks. One can fish there on foot only after the joint is closed. The saleslady discouraged Chef Pedro from renting because the waves had become bigger. As a matter of fact, there was no one on the waters. All the paddlers have gone back to shore.

Persistent, The Traveling Chefs found a fishing pier near the lodge. There was a couple of families that were fishing when they arrived at the pier. Chef Pedro came out empty handed. The fish were not minding at all the artificial baits he was using. Chef Alicia had received them as a gift from a co-worker on her retirement.

THE PREACHER’S COVE AND THE TRIP BACK TO THE CAMPGROUND

On their way out of the park, The Traveling Chefs spotted the Preacher’s Cove. Situated on a hill, it has an excellent view of the lake. Afraid of the bugs, Chef Alicia opted to remain on their rig. Chef Pedro crossed the road and followed the trail. He found himself alone on the woods, and enjoyed its quiet solitude. As he got closer to the edge of the hill, he noticed posted signs to stay clear of the area due to erosion.

Unable to approach the water, he lingered on a bit, contented with the surroundings adorned with huge pine trees, some of them over a hundred year old. He has learned that this whole park was made possible by the pioneering effort of one man intent on preserving the only remaining pine land in the area from unscrupulous loggers.

On his way back to Chef Alicia in the camper, Chef Pedro met a young couple. They looked lost, so he told them the way to the Preacher’s Cove. Then, he found Chef Alicia waiting patiently in the RV. They drove back to the town of Perham for gas and dinner. For the latter, they opted for burritos at Papacito’s, a “four-star” eatery in the Mobil Gas Station. Due to COVID-19, they decided to enjoy their dinner inside Trexia and when they were done, they drove her back to the campground.

“It was well worth it,” Chef Alicia declared while Chef Pedro was steering the wheel on their way back. The former was referring to the driving to Lake Itasca and the $7 entrance fee. Together with a few adventurers, they can now brag that they, too have crossed the Mississippi River!

IT’S TIME TO SAY GOODBYE TO THE THEIR NEW FRIENDS

Early the next morning, Chef Pedro unhooked the connections to their rig for it’s time to leave to their next destination and say goodbye to their new friends. Chef Alicia made sure that everything inside is tidy and tight. On their way out of the campground, they saw their new friend who stays at the first lot on the entrance. She loves gardening and hers is undoubtedly the best looking garden The Traveling Chefs have seen in all the campgrounds they’ve visited.

“I also planted the flowers you saw near the lake,” she said. She intimated that most of her plants were grown from seeds. Best of all, she got the landscaping stones for free from the farmers nearby. Back in Florida, these stones must be so expensive, they all agreed. “Have a safe trip,” she said as they bid her good bye.

The Traveling Chefs have learned that the gentleman who thrilled them about his experiences in Lake Itasca have told his friends about them. They must have left a good impression in him for all his friends treated them very well. Was it the Irish poet William Butler Yeats who said, “There are no strangers here; only friends you haven’t yet met.”? The Traveling Chefs have experienced the truthfulness of this sentiment here and many times more elsewhere. The End.

If you like their story, please tell your friends about The Traveling Chefs. Thank you!