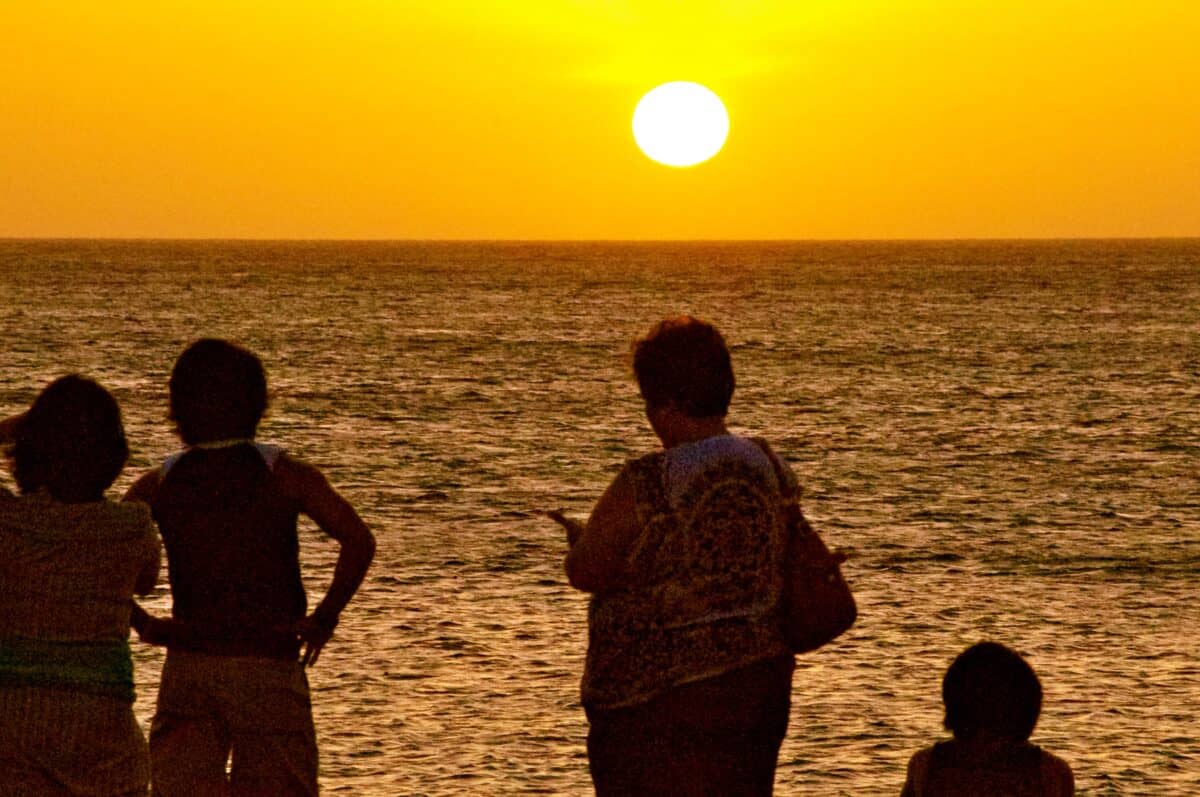 THE TRAVELING CHEFS DISCOVERED ARUBA AND ENJOYED IT.

“Travel is fatal to prejudice, bigotry, and narrow mindedness, and many of our people need it sorely on these accounts.”  ~Mark Twain

While searching for a wonderful place for vacation in the Caribbean, The Traveling Chefs discovered Aruba, the “One Happy Island” which they enjoyed well. There, they’ve spent one of the best weeks of their lives as a family. Those who have gone there were raving about their experience.  It is rated the number one place in the Caribbean for repeat visitors.

To date, it is the place where The Traveling Chefs have spent most of their hard-earned vacation money and did not regret having done so.  In fact, the memories of their special moments still linger in their hearts even to this day. Their adopted daughter Pauline joined them in this special place.

THE TRAVELING CHEFS FLEW TO ARUBA

They took a plane from Orlando International Airport to Aruba via AirTran.  They were in the air for way over two and a half hours.  From the airport, they took a taxi to Caribbean Palm Village Resort.

On the way there, the taxi driver took a shorter route. They were very nervous because the areas they passed through didn’t look desirable.  At one point, he stopped his taxi and spoke to two men and a woman on the street.  The men wore nothing but pants.

Their fears slowly subsided when they reached a paved road and saw better looking buildings and cars.  They didn’t miss the words “One Happy Island” embossed on the plate number of every vehicle.  Chef Pedro was eager to find out what make this a one happy island.

THE TRAVELING CHEFS LOVED THE FOOD IN ARUBA

They were so tired and hungry after depositing their luggage in the Resort.  They went out looking for a restaurant nearby and they chose “Wacky Wahoo”.  They were not disappointed.  It is owned by two fishermen who serve their customers their fresh catch of the day.  They Traveling Chefs loved their food. The waiter and waitresses were friendly. Their only disappointment was the long wait because they did not have a reservation.  It was however, well worth it.

They woke up early the following day to find out what awaits them at this paradise. They decided to hang out at the MooMba Beach Bar and Restaurant located close to Palm Beach.  The place was so busy.  It offers all kinds of drinks and they have live music.

They saw some birds in the sand and an iguana up a tree limb.  It later climbed down the tree and slowly walked on the sand, unmindful of the scantily dressed tourists lounging on beach chairs or walking to and fro the restaurant.  They did go into the water which was very soothing.  There were so many other people enjoying themselves in the beach.

That night proved to be The Traveling Chefs’ lucky night.  The waiter assigned to them is a Filipino with whom they developed an instant vibe. They regarded each other as friends and he introduced them to some of his relatives and friends in the area. Some of them were working at the Tiera del Sol golf course.

So, the following day, they arranged a tee time for Chef Pedro and his son Stephen to play with them at Tiera del Sol. Its driving range is perhaps the best they’ve experienced. They were hitting balls on the direction of the beach at the eastern part of the island.  The cool sea breeze negated the early afternoon sun’s heat.

The course has a great layout. They struggled at the holes which obliged them to hit the ball against the wind.  Although they didn’t score well, they had so much fun.  Their new friends were gracious to play with.  They did not run out of encouraging  remarks when they mishit their balls.

That evening they attended the welcome party of the Island at the town square where their famous tower is located. Food and drinks were available; singers and dancers took turn entertaining the happy crowd of strangers from different corners of the world.

At one point of the show, they called for volunteers to join a contest.  Blindfolded, the participants were carrying a stick and he who hits the rooster with it wins, subject to the audience’s final approval by loudest noise.

Chef Pedro joined and instantly became the crowd’s favorite as he danced goofily while searching for the dummy rooster.  He got a free snack and drink of his choice for prize. He walked back to his family with a sheepish grin as the crowd kept applauding.

For dinner that night, they went to Texas de Brazil, an eat-all-you-can Brazilian steakhouse.  If you haven’t been to one, and if you like steak, go and indulge yourself at least once. Waiters carrying various flavors of steaks take turn carving one for you for as long you keep saying yes by letting your disk’s green side up.

The waiters and waitresses will only stop if you let the red side up.  In addition to mouth-watering steaks, they had unlimited  salad bar, too  which most of them skipped to give room for delicious steaks.  The waiters were friendly and made sure they had fun.

THE TRAVELING CHEFS LOVED THE BEACHES OF ARUBA

On the next day, they’ve found the Eagle Beach a little bit cleaner than Palm Beach.  At the southern tip of the island can be found Baby Beach.  They were the first to arrive there on their second to the last day in Aruba.

They were so early the cabanas weren’t set up yet.  The water was crystal clear Chef Pedro can see his wife and daughter’s feet though the water was knee high.  On several occasions, he felt some tiny fish bumping into his feet and legs. They ate at Big Mama Grill, the only restaurant in the area.

On their way back, they passed by a fresh young coconut stand. They had to stop and enjoyed the fresh coconut juice as well as its jelly.  It sure reminded them of what they used to do in the Philippines where coconut also abound.

Their last stop was the amazing rock formation dubbed as the “place where God rests.” They went up to its summit and saw both ends of the islands. They saw a cruise ship on its west side and a cone-shaped mountain a little farther south.

They also dined at Driftwood, another seafood restaurant.  The food was likewise great. It didn’t however make them forget their experience at Wacky Wahoo. Perhaps they were hungrier when they entered the latter. Or perhaps nothing beats first time experience.

They also tried the Filipino restaurant referred by their new friend.  The owners were very friendly and their cooking was exceptional.  Theirs is the only place in Aruba where The Traveling Chefs and their family ate more than once.

On their last night, they invited their new Filipino friends for a going away party at their unit in the Resort.  The latter brought a guitar and drum and they were singing and drinking and having fun till almost midnight.

They did not want that night to end nor their vacation to stop. Yet, they were powerless to stop the clock. And they must go back to the US, back to their daily routine of work, home, and work again. Their new friends urged them to come back. “Maybe someday,” they wished, thinking that it will remain just a wish for a long time.

The staff at the Resort were also nice and friendly.  They had a great time during the whole week.  They were glad they discovered Aruba. Theirs was indeed a week in paradise.  They understood why many visitors in Aruba decide to go back.  It is without a doubt a “one happy island.”

When will you discover your own one happy island?

For deeper insights into Traveling Chefs, please subscribe to their newsletter at the bottom portion of their website.

One thought on “The Traveling Chefs Discovered Aruba”