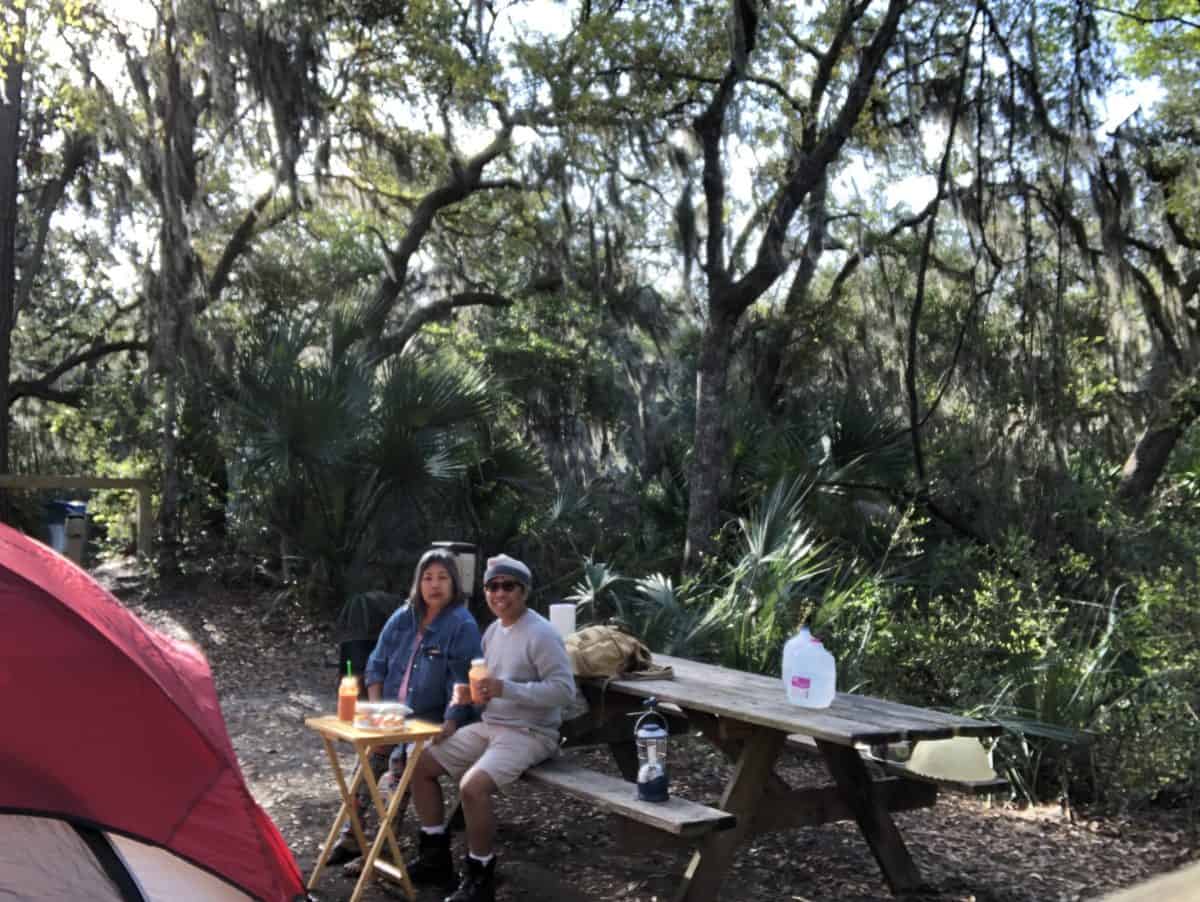 The Traveling Chefs‘ first camping happened in the Little Talbot Island State Park. After months of trying to persuade Chef Alicia to try camping, she finally said yes with some caveats.

There should be water and electrical hook ups and the sleeping condition should be comfortable. Chef Pedro assured her she will be fine for he said he has camped before.

Chef Alicia didn’t know that his last and only camping happened during his boy scout days, about fifty years ago. As one of the smallest boys in elementary school, he wasn’t much of help in pitching a tent or in cooking. All he can remember is that he joined the knot tying and building a fire contests.

After a thorough search of available campgrounds, The Traveling Chefs decided to camp in the Little Talbot Island State Park. At this time, they had no RV yet, so they use a tent their friends gave them a long time ago. They paid $24 for a night stay at Little Talbot.

“What if it rains during the night?”, Chef Alicia asked. Chef Pedro said they’ll be alright. The tent should be able to handle that. If not, they can sleep in their Expedition as they did last night in Fernandina Beach, he explained.

A young courteous ranger welcomed them in. He assured them they will be alright even though they are new to camping. As soon as they found their site, they thought of pitching their tent right away.

THE TRAVELING CHEFS PITCH THEIR TENT ON THEIR FIRST CAMPING

Chef Pedro surveyed the site and decided to put the tent up on the level ground. To his amazement, Chef Alicia set her half of the tent up ahead of his. All the while, he was bragging that he is the pro in camping.

After the tent is up, Chef Pedro built a fire. He rummaged for dry leaves, twigs and roots and with only a match, started the fire. He had an axe with him and was about to cut a fallen tree nearby when he recalled that campers must use their own firewood.

When he reviewed the welcome paper, he found out he couldn’t use the dry leaves or anything on the ground to start the fire. They hurried back to the station and bought the firewood.

For their dinner, they enjoyed their newly-cooked sweet potatoes and paired them with chicken adobo they have brought from home. They were happy to note that there were no mosquitoes or other insects to spoil their fun. They thought the campfire drove them away.

At 9:30 PM, they were ready to sleep. Before they got into the tent, Chef Alicia mentioned that it was getting windier. Chef Pedro told her to stay calm because it won’t rain. He reminded her to be ready with her pepper spray as he is ready with his. He also told her that he has also a hunting knife beside him and an axe should there be a need for them.

AND THE RAIN KEPT POURING

So far so good until the rain woke them up! They checked their phones for time and found out it’s 2 o’clock in the morning! “What shall we do, honey?”, Chef Alicia asked. Ever the “expert”, Chef Pedro reassured her not to worry for the rain shall soon stop.

Thirty minutes passed, the rain kept pouring. This time, the water has drenched some parts of their sleeping beds. They scampered to their Expedition and slept there ’til morning. Chef Pedro realized that had he pitched tent on the hill, the water wouldn’t have soaked their sleeping bags.

As soon as they woke up, they broke camp and washed their tent and dried it on their makeshift clothesline. They then proceeded to take a shower. Chef Alicia found a laundry room equipped with washer and dryer on her way there. The laundry room thrilled her.

At this point, Chef Pedro remembered he left his keys and his wallet on his backpack which he had placed on top of the picnic table at their campsite. He sprinted back and found the backpack right where he had left it.

Right here was The Traveling Chefs’ eureka moment. They felt in their hearts the freedom that travel brings, that living in their house limits that freedom, that the road could be their new home, that a motorhome will make that happen. Most importantly, they realized they could live together happier with less.

Instead of taking I-95 S, they turned north for their next adventure. This time, Georgia is in their minds.