The Traveling Chefs Found Freedom On The Road 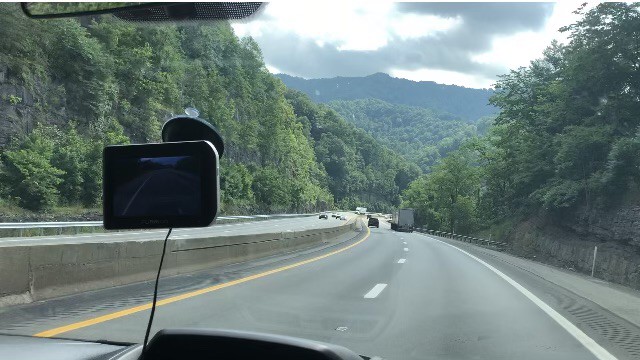 THE TRAVELING CHEFS LEFT HOME AND FOUND FREEDOM ON THE ROAD

In the summer of 2021, The Traveling Chefs left home and found freedom on the road. Without a single moment of sleep the night before, on July 3, 2021 they drove Trexia from their home in Apopka, Fl with the intent of reaching Ohio by Independence Day. Trexia swerved many times with Chef Pedro behind the wheel, fighting drowsiness and fatigue.

Chef Alicia had bouts of her own. In addition to drowsiness, allergies bothered her. She thought the food she purchased in between stops may have caused them. The Benadryl she bought from the pharmacy failed to alleviate her symptoms: bulging red spots the size of half a dollar coin spreading around her thighs and back.

Notwithstanding their discomfort, they felt a special sense of freedom which they can only find on the road. They have longed for this kind of freedom for a long time. After taking an early retirement, it is now within their reach.

After 12 hours of driving, The Traveling Chefs decided to stop over at Brian and Laurie’s house in Durham, North Carolina. It relieved them of many of their ills including fatigue, drowsiness, and allergies. Brian is Chef Alicia’s nephew. He and Laurie will marry in September in New Jersey. So, The Traveling Chefs may travel anywhere as long as on the first week of September, they will be at the wedding.

Stephen and Kay who temporarily reside with Brian and Laurie didn’t know The Traveling Chefs were stopping over. The look on Stephen’s eyes when he saw his mom and dad already seated on the table with a box of Bojangle fried chicken said it all. They all offered The Traveling Chefs to stay longer but the latter have reservation in a campground in Ohio since July 1st.

BACK ON THE ROAD FOR MORE FUN AND FREEDOM

After a tearful goodbye, the Traveling Chefs decided to get back on the road, in search of more fun and freedom. Brian who had to go to work early in the morning, hugged his Auntie and Uncle tight the night before and said goodbye.

The remaining three and their two dogs Simba and Kona bid The Traveling Chefs goodbye early in the morning. Stephen wanted to make sure that his dad would check the air pressure on Trexia’s tires at the nearby Sheetz before they set out for the long journey. It turned out to be a tremendous help since Trexia needed more air on all its 6 tires.

With tires properly filled with air and their tummies stuffed with a hearty breakfast, The Traveling Chefs went on with their journey, enjoying their freedom on this most apt day, July 4th, stopping only for gas, food, and at one time, a beautiful sight.

A STOPOVER AT THE PILOT MOUNTAIN

The Traveling Chefs stopped over at the sight of the Pilot Mountain. Rising 2,421 ft above sea level, it is one of the most distinctive natural features in North Carolina according to Wikipedia. The earliest known inhabitants of the area called it “Jomeokee” meaning “great guide.” It must indeed have guided these early people whose sighting of the Pilot mountain The Traveling Chefs now share.

There were several fellow travelers that likewise made a stopover at the Pilot Mountain. Like them, many took selfies in the area. Chef Pedro directed his eyes onto the flowers nearby, then fixed them on the mesmerizing Pilot Mountain afar, thinking to himself the real Pilot in their own journey is the One deep within. Then they decided to take their lunch inside Trexia as they let the refreshing air in by opening her windows.

The American Indians and the early white settlers had used the Pilot Mountain as a landmark. It is a significant landmark for them as well as they’ve found out shortly afterwards.

TREXIA STRUGGLED ON THE HIGHWAY ALONG THE MOUNTAINS

Trexia began to crawl on a couple of occasions as the highway became steeper shortly after they’ve passed the Pilot Mountain. The poor girl grumbled as her RPM went past 4000. Luckily, there was a semi ahead of her which was on the same predicament. Chef Pedro drove behind her it patiently. They found out later that Chef Pedro’s inexperience driving the rig is really the culprit in Trexia’s seeming poor performance.

The Traveling Chefs saw signs to various attractions on their way to Ohio but they grudgingly ignored them for they intend to reach the campground before nightfall.

Chef Alicia was forced to take videos of the curvy stretch along the West Virginia Turnpike and of the two mountain tunnels. Chef Pedro asked her to do so because he was concentrating on the road ahead. Utmost concentration is needed for an accident can happen in a split of a second, he thought.

THE TRIP FELT SAFE AND FUN EXCEPT FOR THAT CORVETTE

Today’s trip felt safer compared to the one yesterday, except for the zooming Corvette which Trexia almost collided with as the former tried to overtake her. This happened when Chef Pedro was attempting to change from the middle lane back to the right.

The right lane was clear when he made his decision to do so but as he was turning the wheel, he saw a speeding Corvette almost blocking the right lane. If he didn’t take a second look at the side mirror, it would have been a complete disaster. Chef Pedro and Chef Alicia hurled some expletives but by then, the Corvette was far way ahead.

At one point, they saw some fireworks shooting up above the trees along the highway next to a rest stop. It was an unmistakable reminder of that day being the 4th of July, a big celebration of independence of their adopted country. And there they are on the road, celebrating their freedom from the mundane day to day task of earning a living. Happy 4th everyone!

After almost nine hours on the road, they arrived at Rocky Fork Ranch Resort in Ohio. The End.

If you like their stories, please refer The Traveling Chefs to your friends. Thank you.